Finalists of the 1. Online Portfolio Walk

The applications for the first season of the online portfolio walk of the German Photographic Academy have made it clear that there is a new diversity in the stylistic orientations of contemporary photography. Belief in the objectivity of the medium is waning and a free space for a broad spectrum of conceptual and experimental working methods is developing. It was not easy for the jury to select only five positions from this wealth of subjective perceptions of our life-world that could give new impulses to contemporary artistic photography.

Technically, aesthetically and psychologically, Katrin Jaquet questions the image archive of her own family history in her series 'neg'. The visual diary 'Fuck Me' by Josh Kern provides an unvarnished view of friendship and love. In contrast, Elena Helfrecht uses a conceptual strategy to create a subjective construct of memory by staging family archive material from the 'Plexus' series. Using a sophisticated montage technique of still images from the everyday world shaped by omnipresent media images, Ying Shao creates visual interfaces between reality and fiction with the photographs of her series 'Sehen-Medusa'. The process of perceiving reality is also the core theme of Bärbel Möllmann, who transforms real spaces into a 'Camera Obscura'.

Jury member Ruth Stoltenberg about the work: 'After the death of her mother, Katrin Jaquet is given several albums and boxes of family pictures from 5 generations. A few years later, she unpacks these pictures and processes them in a wonderful photographic work, the series 'neg'. When looking at them, the many pictures with all the happy people who were photographed there in beautiful moments did not seem honest enough to her. She was missing the dark sides of life, the negative, and she went into a very creative process. She digitally converted photographs into negatives, superimposed positive and negative images in a double sense, layered people and faces and generations on top of each other until coherent images emerged - coherent from a psychological, but also an aesthetic point of view. Images that evoke familiarity and alienation at the same time, that are touching and exciting.' Katrin Jaquet about her work: 'In my work I deal with the medium of photography and its modes of operation. I am interested in how technical and psychological aspects of photography intertwine. The series "neg" is about family history. Starting from a very personal approach, I deal with general questions. After the death of my mother some years ago I took over all family photos. Chronologically ordered albums, but also boxes full of unsorted pictures from five generations. Most photos convey the image of an intact family - a positive image. And just like there is no dispute visible in the pictures, the negatives are missing in the archive. I am interested in the idea of the negative as a potential - technically, aesthetically, and psychologically. So I digitally produce the negatives and superimpose them with positives, using similar motifs from different generations. I look for the point where positive and negative become something new, which corresponds to my inner image and at the same time goes beyond my individual experience. In the end, the pictures now seem to me more like x-rays of an average West German middle class family, in which behind the superficially happy façade tensions and uncertainties arise. And even if I wanted to put it aside at first, it seems that traces of the Nazi period are visible. Hardly in the form of uniforms or badges, but still in postures, facial expressions and moods." Short bio: Born in Rendsburg in 1971. 1991 -98 studied art and romance languages in Kiel and Paris with Renate Anger, Hubertus von Amelunxen, Alain Bonfand and Jean-François Chevrier. 1998 NordWestLotto Art Prize, 1999/2000 Scholarship Künstlerhaus Lauenburg, since 2000 in Berlin 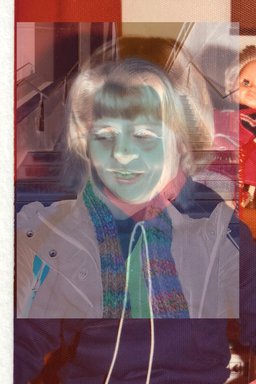 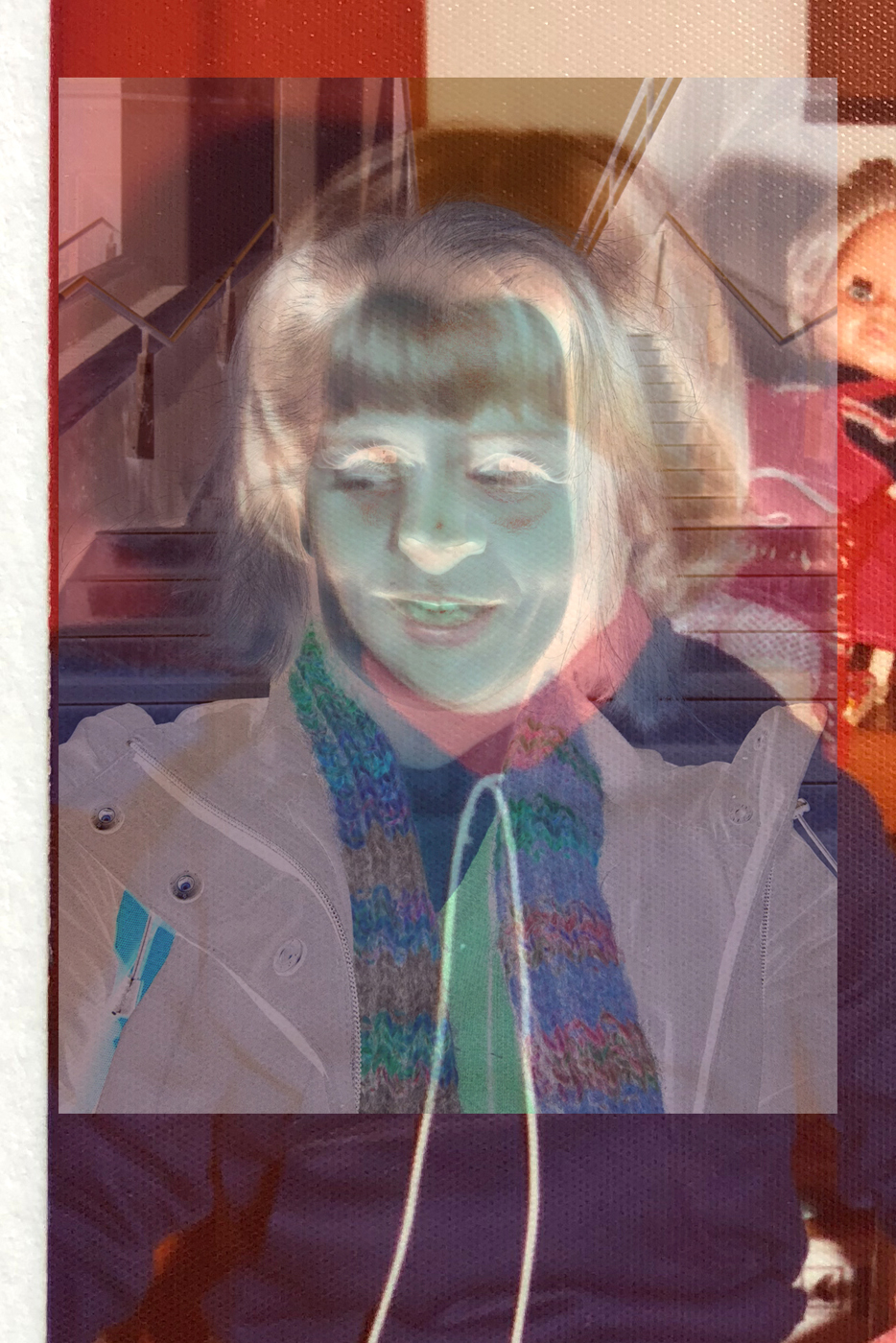 Jury member Andreas Langen about the work: 'Josh Kern is a young guy who has pretty much exactly five friends, an unknown number of skateboards, a girlfriend with tattoos and big dark eyes, an analog camera, deep self-doubt, a preference for window seats on the track, a bluebird in his heart who only ever comes out at night, a smart teacher who advised him to always put the most personal thing in his work, and most importantly, a hell of a lot of talent. His photo diary "Fuck Me" is much more sensitive than the snotty title might lead you to believe, a timeless hymn to the tricky, glowing, magnificent and exhausting state of being called youth. It's nice that the film images of Josh Kern look so blurry, grumpy and fluffy. Perfection is fucked. When your book is finished, send it to Nan Goldin, Josh. If she doesn't have a heart of stone, she'll write you the next preface.' Josh Kern about his work: ''Fuck me' is an ongoing story about youth, friendship, love, disappointment, being lost and finding oneself. I became obsessed with documenting the world around me. My camera was with me everywhere and it somehow became a part of myself. It gave me permission to not be shy and the ability to show how intense and beautiful I perceive life. I found something where I can shamelessly express what I feel, my critical view on our generation and myself and my love for life in general.' Short bio: Josh Kern was born in 1993 in Kaiserslautern, Germany. He is currently studying at the University of Applied Sciences and Arts, Dortmund and is on the way to a Bachelor's degree in photography. For the last four years he has been photographing a series about his friends, who recently was published as a book by "dienacht Publishing" (Fuck Me) 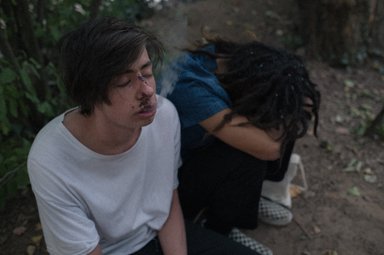 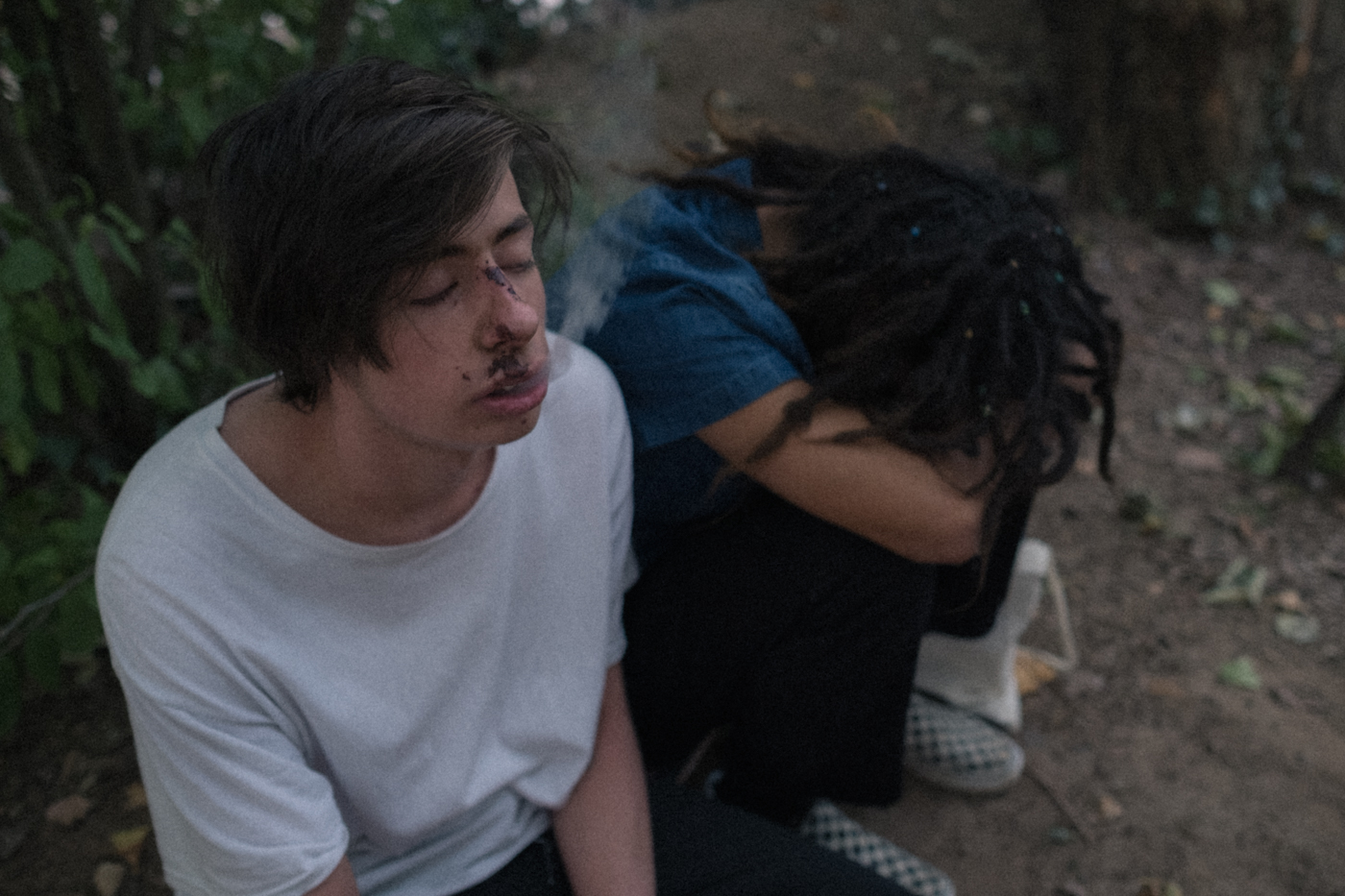 Jury member Ingo Taubhorn about 'Plexus': 'Dealing with one's own personal history using archive objects has never been more popular in contemporary photography. Elena Helfrecht (born in 1992 in the Upper Franconian town of Marktredwitz in the Fichtelgebirge mountains) follows in the footsteps of her family tree and, with the help of the family archive, creates surprising black-and-white image stagings that balance between reality and invention and thus tell a completely new (life) story.' Elena Helfrecht about her work: ''Plexus' is concerned with indirectly transmitted memories, inherited trauma and the connections between traditional history and the world today. In the pictures, I use my family estate and archive to trace my family tree. In the process of photographic remembrance, I reassemble fragments of an incomplete history, which is not about historical correctness, but about showing bridges between the now and then. Archive objects are staged and reassembled in a new way, linking the narrative adhering to them with new contexts. Dreamlike sceneries connect what has been forgotten and is preserved. As a case study, the images are intended to suggest the influence of the family in the discovery of recurring psychological and cultural processes within history. The house becomes a symbol for the world, combining a personal and a common history.' Short bio: Elena Helfrecht (born 1992 in Marktredwitz, lives and works in London and Bavaria), is a visual artist with focus on photography. In 2019 she completed her Master in Photography at the Royal College of Art in London with distinction, after completing her bachelor's degree in art history and book science at the Friedrich-Alexander-University in Erlangen in 2015 and from 2016 to 2017 studied art and history of images at the Humboldt University in Berlin. 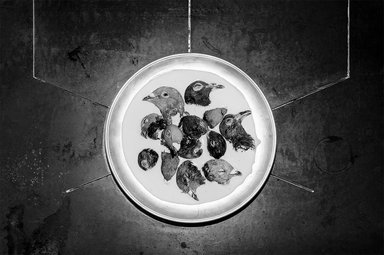 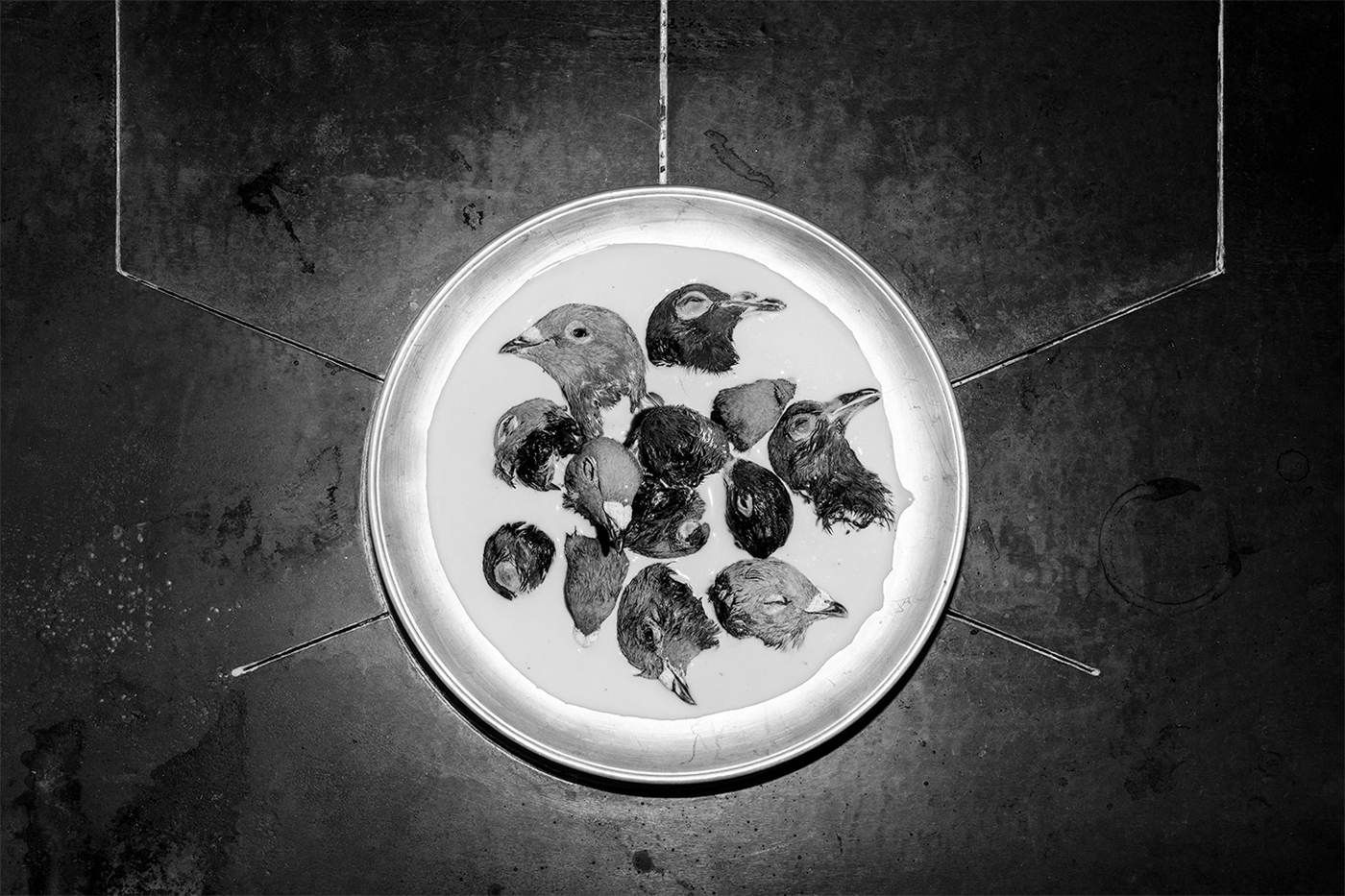 Jury member Wolfgang Zurborn about the work: 'Ying Shao takes us away with the photographs of her series "Sehen-Medusa" to the interfaces between real social life and a fictional imagination of the world. In the everyday world surrounded by omnipresent media images on screens, posters, displays, screenings, it is hardly possible for contemporary people to cope with the manifold stimuli and messages while preserving subjective sensations. In the snapshots and radically fragmentary incisions in the consumer world, urban and media space are assembled into a sequence that gives expression to the intoxication of images and at the same time allows for a reflexive pause.' Ying Shao about her work: ''Medusa' refers both to the goddess in ancient Greek mythology, from whom one can be petrified at a glance and to the jellyfish in the underwater world. It means that real existence is connected with fantasy and at the same time deeply connected with the movement of "seeing". Screens and optics fill our world today. These generated images from the imagination are like smoke, like a habitual medium entering the air we live in. Colour, superimposition, reflection, when we finally look at the screen, where is the reality and where is the imagination? If we are constantly moving between the real world and the imaginary world, have we already become part of a fantasy that is represented in a mirror?' Short bio: Ying Shao was born in 1990 in Wuxi, Jiangsu, China. From 2009 to 2014 she studied architecture at Tongji University in Shanghai. Afterwards she worked in Shanghai. Since 2018 until now she is studying at the TU Braunschweig for a master's degree. From 10.2019 to 01.2020 she participated in Wolfgang Zuborn's photo workshop "Where is cinema? During this time she visited public spaces such as media markets, cinemas, pet shops in Braunschweig, Wolfsburg, Hannover and Berlin. 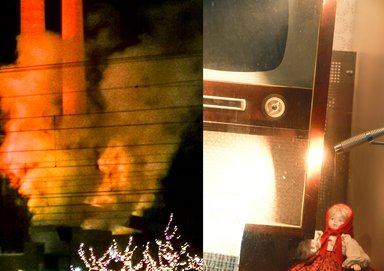 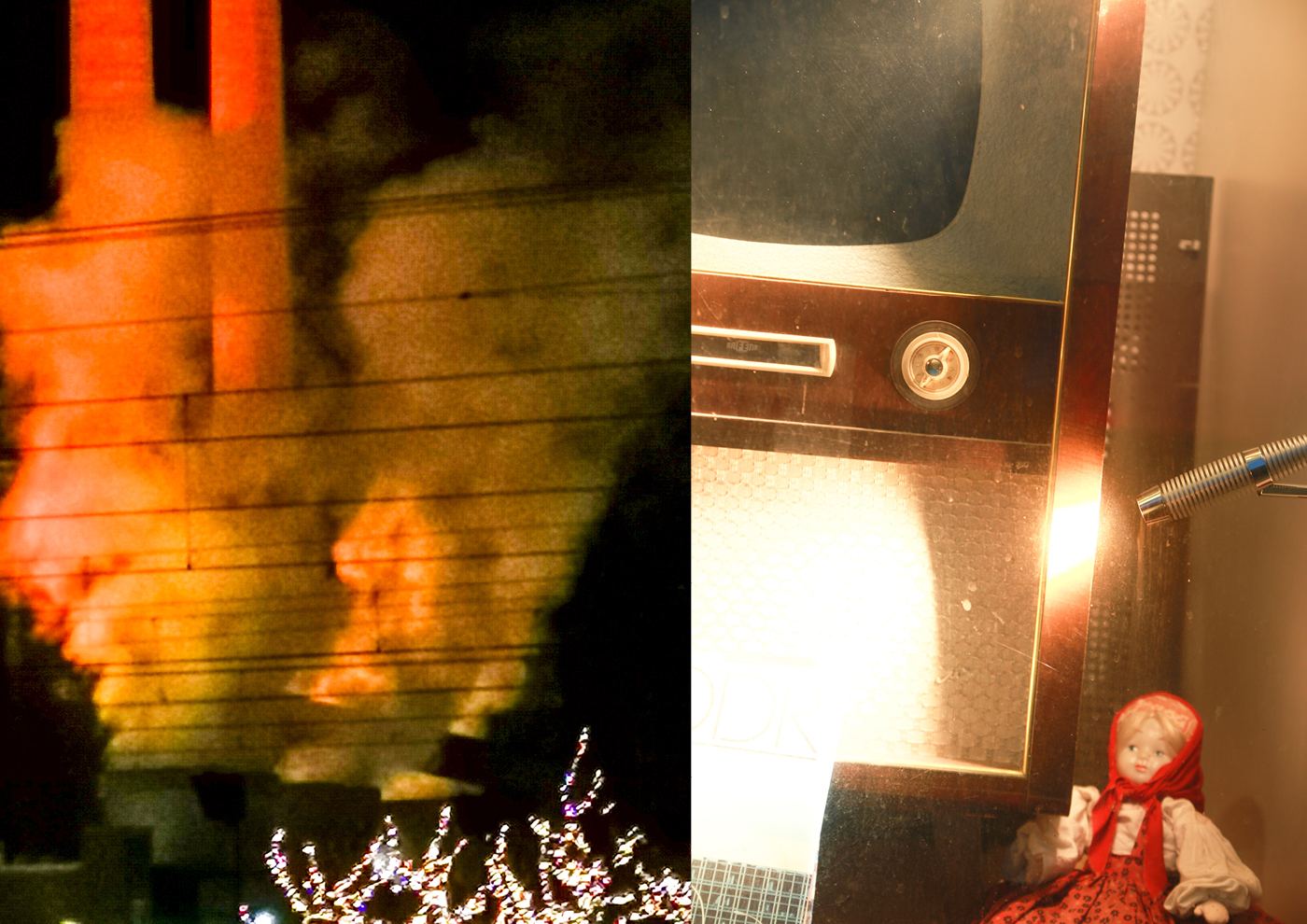 Jury member Jürgen Scriba about the work: 'The Camera Obscura is the oldest imaging process, about a thousand years before the invention of photographic processes succeeded in fixing these images permanently. Numerous artists are still experimenting with the method in modern times, but a realization as convincing in concept and art as the works of Bärbel Möllmann is an exception. The rooms converted to a camera are given their own role in the artistic intervention, and even the ingeniously simple change of perspective, to orient the direction of the image to the projection, creates worlds in which potted plants and instantaneous water heaters defy gravity.' Bärbel Möllmann about her work: 'Since 1996 I have been working with the camera obscura, respectively a pinhole camera. In my artistic work I deal with social change, often in reference to interviews and in combination with pinhole camera portraits or landscape shots. The submitted photographs were all taken in rooms that were converted into a camera obscura. In the works I am not only interested in the resulting photograph, but much more, or even more, in the process and perception of reality. How is the image created? How do we perceive the moment in which the image is created? How long is a moment? What does the photographer see? What does the viewer see in the picture? At the end of the 1990s a broad debate arose, known as the "pictural turn", in which the camera obscura is seen as the starting point of the view. The relationship between the perception of the world, the reproduction of this and the corresponding reflection is discussed in detail and from different angles. This is how William John Thomas Mitchell formulated the questions: What is an image? He was guided by the materiality of the image and wants to connect the turn to the image with social and political questions. Jonathan Crary added in techniques of the viewer: seeing and modernity in the 19th century, still reflection, to the inner and outer world. The submitted works are based on this discussion. Thus, the construction of a camera obscura is not simply about the so-called camera-obscura effect, but rather about the interior and exterior space and how it is perceived, the inversion of space to the fleeting moment, AND the reflection of space and time, and the political and social context of the real estate world.' Short bio: Bärbel Möllmann born in Bocholt, Germany, is an artist and curator, working and living in Berlin and Düsseldorf, Germany. She studied at the Tyler School of Art, Philadelphia (US) and the University of Applied Science, Bielefeld (DE). 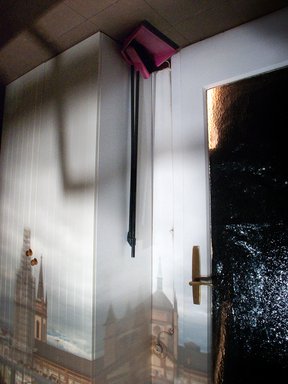 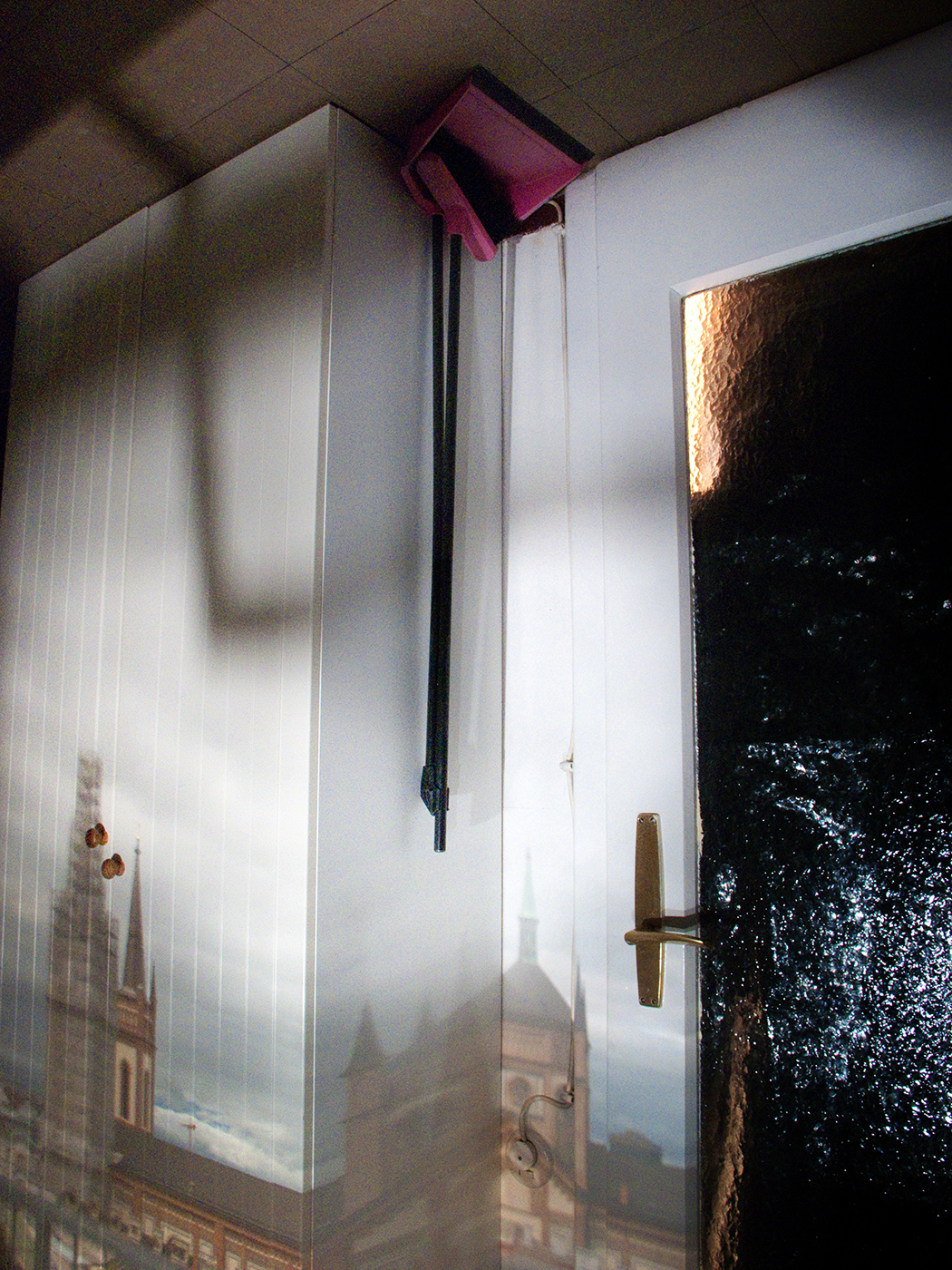