A llama is to be led into a ballroom. 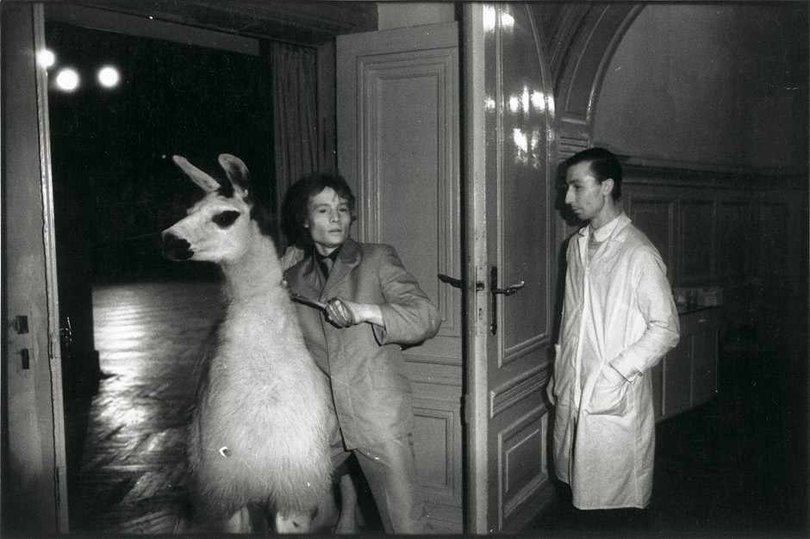 A llama is to be led into a ballroom.

The first time I met Erasmus was in June 1985. Two friends had invited him and his companion Annette Schröter to the upcoming summer night party in Weimar at the Orangerie of the Belvedere Palace. It was to be an illustrious party and the beginning of a long friendship. We liked each other after a few moments and talked not only about our photos and Annette's paintings. Until then, I knew Erasmus from a publication in the magazine "Fotografie". Photographs from the series "Nachts", his diploma thesis at the "Hochschule für Grafik und Buchkunst". This disturbing series consisted of cleverly flashed black-and-white infrared photographs of surreal scenes of life at night in Leipzig in 1981. They stood in stark contrast to the photojournalistic - propagandistic GDR photography. He had captured the mood of his country between a state of twilight and agony. People waiting at bus stops, scenes of a dance tournament, enigmatic interiors such as the one in the title: "A llama is to be led into a ballroom". A person in a work coat can be seen holding a llama on the reins in front of the open door of a ballroom. To the right is a man in a white coat looking at the llama like an extra. These frozen, unsparing gazes came to define Schröter's everyday imagery in the GDR and quickly made him famous and an enemy of the art-determining party bigwigs. The second time we met was on 17 July 1985 for the farewell party of the artist couple. Afterwards, they both left for Hamburg in the West. From now on, we were in customary postal contact: cheap oil - artists' paints from the East for records and catalogues from the West. But work samples were also exchanged. Erasmus sent slides of his colourfully illuminated bunkers of the Atlantic Wall and wonderful portraits and pictures of Annette, I the black and white prints of my HEAD BODIES. At the same time, we pushed ahead with our careers. After the fall of the Berlin Wall, we were in the usual friendly competition, driven by ambition and supporting each other. Professional success stories shuttled back and forth, the years passed and everything was ok. I thought. But apart from the endless art and political discussions, we never talked about our own sensitivities. And if they did, Erasmus listened and never said anything about himself. Not a syllable. His wife and companion was no different. After 43 years of living and working together, he said goodbye to her and us without notice. Meticulously planned like one of his ambitious photo projects. What a shock. To the stone soft. My deepest sympathy goes above all to you, Annette.