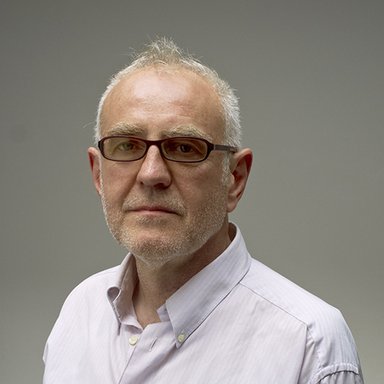 I studied at the Folkwangschule in Essen in the class of Prof. Dr. Otto Steinert and Prof. Erich vom Endt along with Gosbert Adler, Wendelin BottlÃ¤nder Joachim Brohm, Andreas Gursky, and Volker Heinze. Fundamental discourses among the Folkwang students took place in the colour photography lab at the first professional colour photography department in a German university set up by Prof. Erich vom Endt. Ute Eskildsen initially exhibited my first colour photographs from 1979 at the Museum Folkwang in 1981. I received numerous scholarships and prizes, among them the Leopold Godowsky Jr. Award for Color Photography awarded to me by the Photographic Resource Center at Boston University in 1993. Works of me are represented in many collections, such as Museum Folkwang, Essen; Museum Ludwig, Cologne; Staatsgalerie Stuttgart; Mussée Européen de la Photo, Paris; Bibliothèque Nationale de France, Paris.

I take photographs so that the things that lie behind can become visible. With reference to the tradition of classical subjective photography, this new development is defined as 'extended subjective photography'. Photographic reflection is achieved through the use of specific associations and metaphors that act together to create a complex understanding between art and the viewer. There are symbols all around us; we apply them to our work to create new - and relevant - interrelations. My focus is not to produce an appropriate representation of reality; instead I superimpose and permeate reality with symbols and allegories in order to communicate my own state of mind.

Helmut's and Roberto's World (as attachment layout) An Essay on the Ruhr Theater (courtesy by Alexander Wewerka, Berlin)

My mother died at the age of 82. Shortly before her death she still was able to ride her bicycle to take care of her home and do the shopping on her own. All of a sudden she felt sharp pain in her bones. The first diagnosis of leukemia was not pursued by her family physician or by others. She was sent from one hospital to another. The experts did not explore the possibility of leukemia and decided that she had osteoporosis. This was the wrong diagnosis. They did not give her the only treatment that could have saved her. She had a curable leukemia, but it was treated too late. She had to suffer. Every minute that I was available, I spent with my mother. I cooked for her. I organized the household and started to take pictures of her and the objects surrounding her. Through photography I started to preserve the objects in their original context. I could condense the syntax of a private and domestic life, and identify the culture of an over 80-year-old woman and the environment she created. This work began under the strain of mourning and sorrow, private memories, subjective feelings. It nevertheless presents a point of view that is sociologically and philosophically considered and contemplative. This perspective refers to the unity and the sense of the objects. My mother was treated carelessly by her doctors; she herself treated all with care. Everything in the house has its order, its destiny, and its place. If an object does not have a use, habit, or custom, it has a sacred character as in a place of worship. Respect toward the objects is obviously visible in the pictures already done. The cleaning rag (see picture) was used so long it atomized, fell into pieces. Daily custom and habit form the basis of the photographic reality. The photographs form an important portrait of the generation of which my mother was a member, the generation that grew up and was socialized between the two world wars, and that experienced the defeat in WWI, wild inflation, poverty, starvation, Fascism, defeat in WW II, the division and reconstruction of Germany, the Cold War, and Reunification. I am recording this world before it is destroyed, divided, torn into pieces. The photographs are a testament to the daily culture of a whole generation, one that cherished and husbanded belongings and never adopted the more materialist, "disposable” culture of the generation that followed. The work will represent a whole life, that of my mother, and through her many others. The Estate: Record of a Life will be a social critique of the throw-away society in which even people are treated as disposable objects. 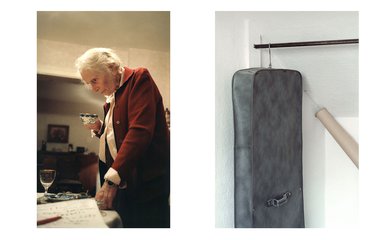 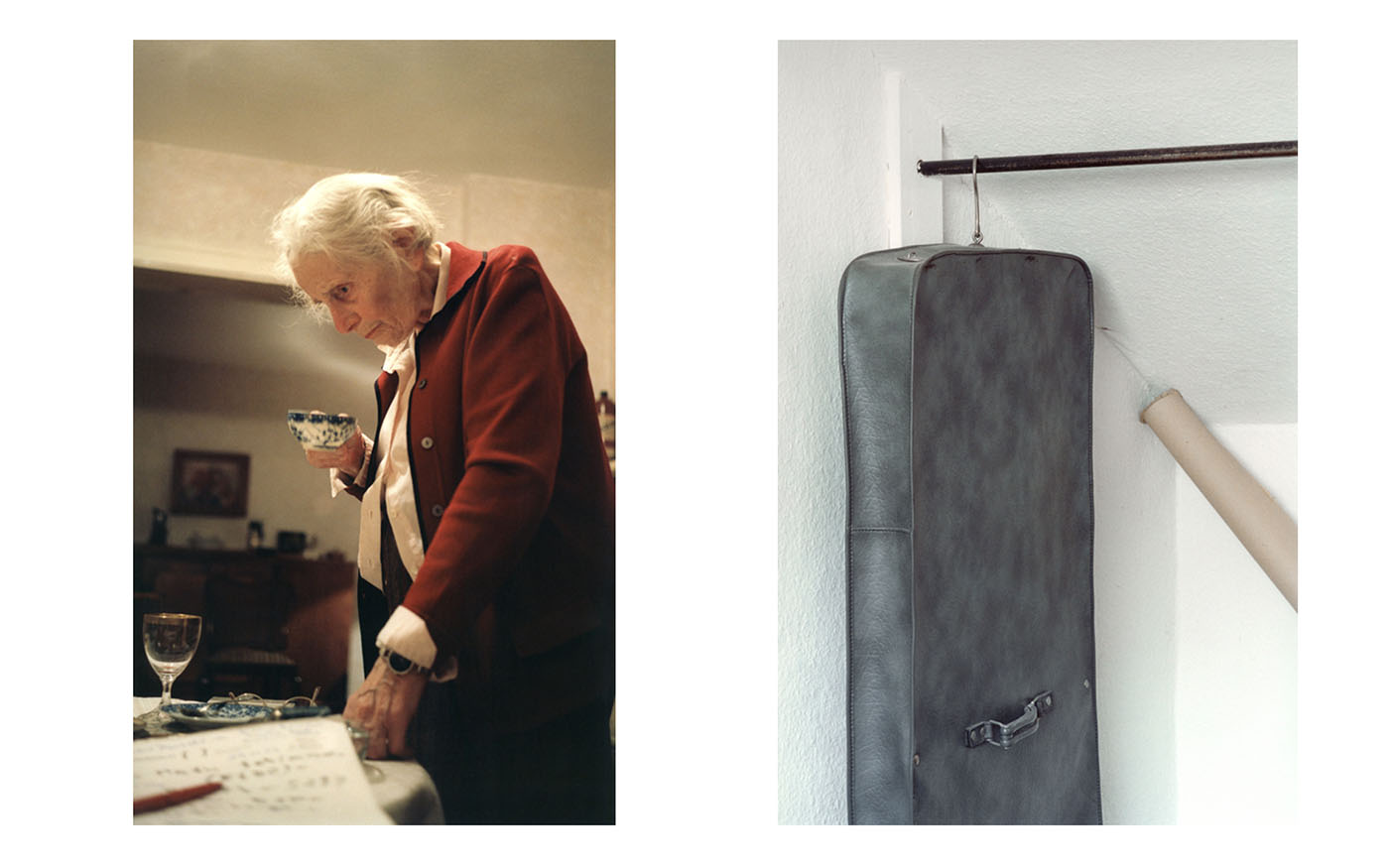 True Nature - Knut Marons early "Bilder über Landschaften" Andreas Steffens The political turmoil of the "German Autumn" in which the unbearable 1970s culminated was followed by the intellectual excitement about the "New Philosophers" (nouveaux philosophes) and "Postmodernism" with which the 1980s began. It was the time when first theoretical concepts about "the virtual" and "new media" emerged, and the newest aesthetic reverted to its oldest origins in a newly defined Romanticism, and the rediscovery of the "sublime" proved just how precisely old thinking could apply to the new phenomena. In this respect Knut Maron's "Bilder über Landschaften" (images over and about landscapes) retrospectively prove to have accomplished first-rate pioneering work on this front. In an ironic reversal of the relation between object and theme, they turned the popular Polaroid photograph into a medium for rather metaphysical war coverage from the dregs of a petit bourgeois summer holidaymaker's misconception of nature. They epitomise the aesthetic imperative of the insignificance of man as a theme in landscape painting that Heinrich Wölfflin had established in 1926 in a review about Arnold Böcklin. The manner in which Maron's photographs depict humans in the context of nature, demonstrates how disconnected they are from nature. Even in a photograph including more than 30 people, they seem to be disappearing. While these figures are essential to the composition, they assert the reality of human superfluity. In this metaphysical transferral, the matter of "sublime" quality, which 1980s aesthetics discovered in a more anthropological sense, becomes evident: as much we are an integral part of nature as humans, we also find ourselves in a relationship of mutual estrangement. The photographer simply observes, he just looks and no longer takes part in the situation he is showing. And that is exactly where the first and most important criterion of the photographic work of art lies: in commenting on the scene it grasps. The comment these "Bilder über Landschaften" offer is conceivably matter of fact, and at the same time they express a tentative intense beauty and an equally tentative indication of an elementary threat that foils the romantic misunderstanding of Romanticism as a taming of nature: the world continues to exist without us; we exist, but we only become a requisite part of it through the position we take. 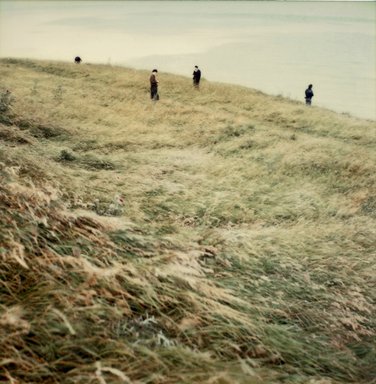 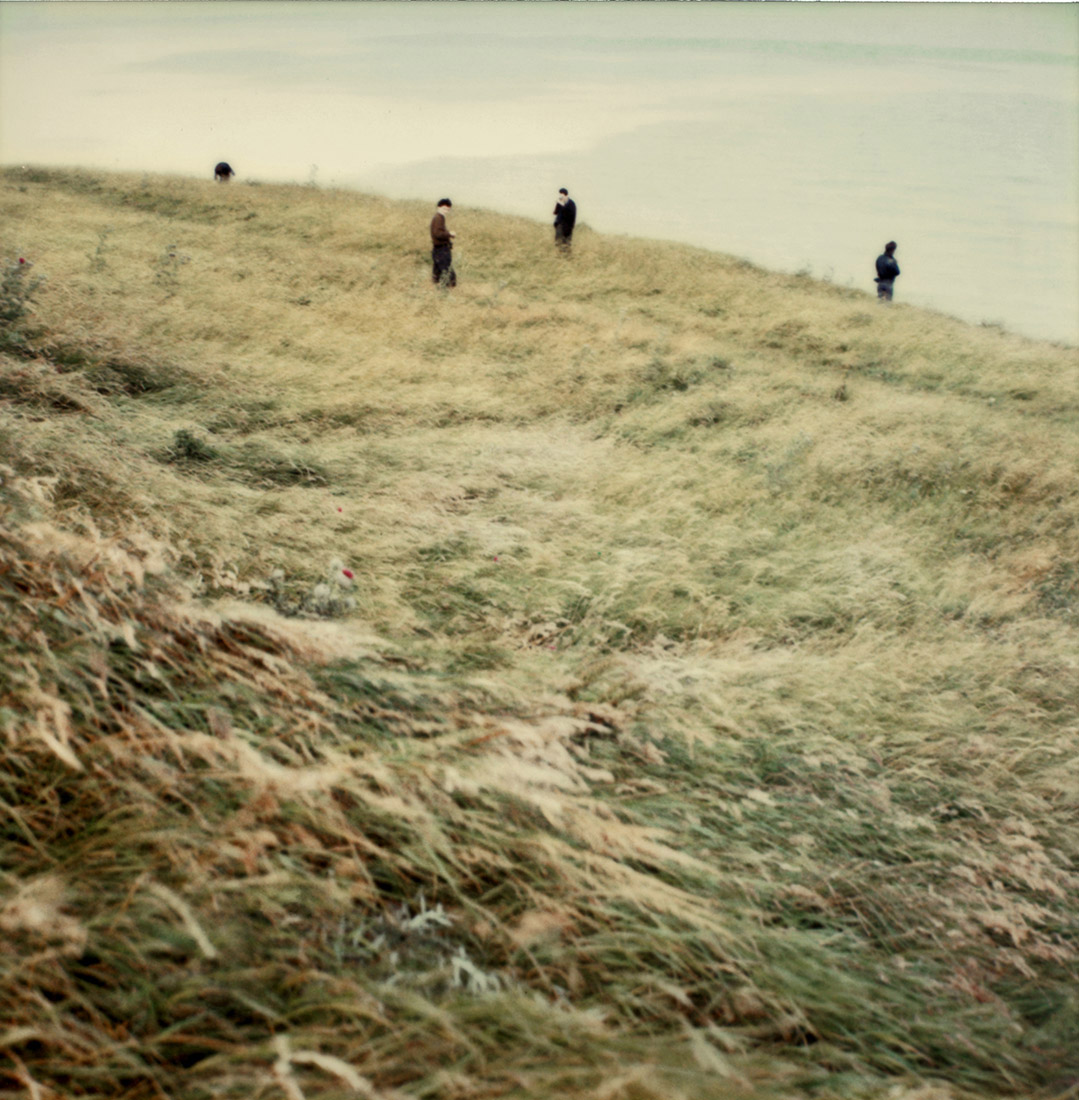 Knut Wolfgang Maron | On The Sacred And The Profane (1980 - ongoing)

Knut Wolfgang Maron | On The Sacred And The Profane (1980 - ongoing)

Book presentation and exhibition Originated in the 80s of the last century, the group of works is called "VON PROFANEM UND HILIGEM". Recorded without artificial light source, the black and white photos show details of a cathedral, which are overlooked only too easily: inconspicuous, incidental, and yet image worthy. The image excerpts from a religious context in the broadest sense are contrasted with details from the profane world beyond the church walls. Through the special perspective, the iconic forms of the perception of the sacred and the profane merge. They are in a dialectical context. The work is being pursued to this day. 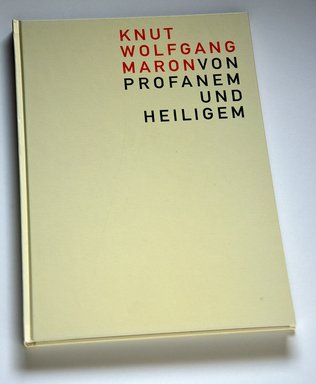 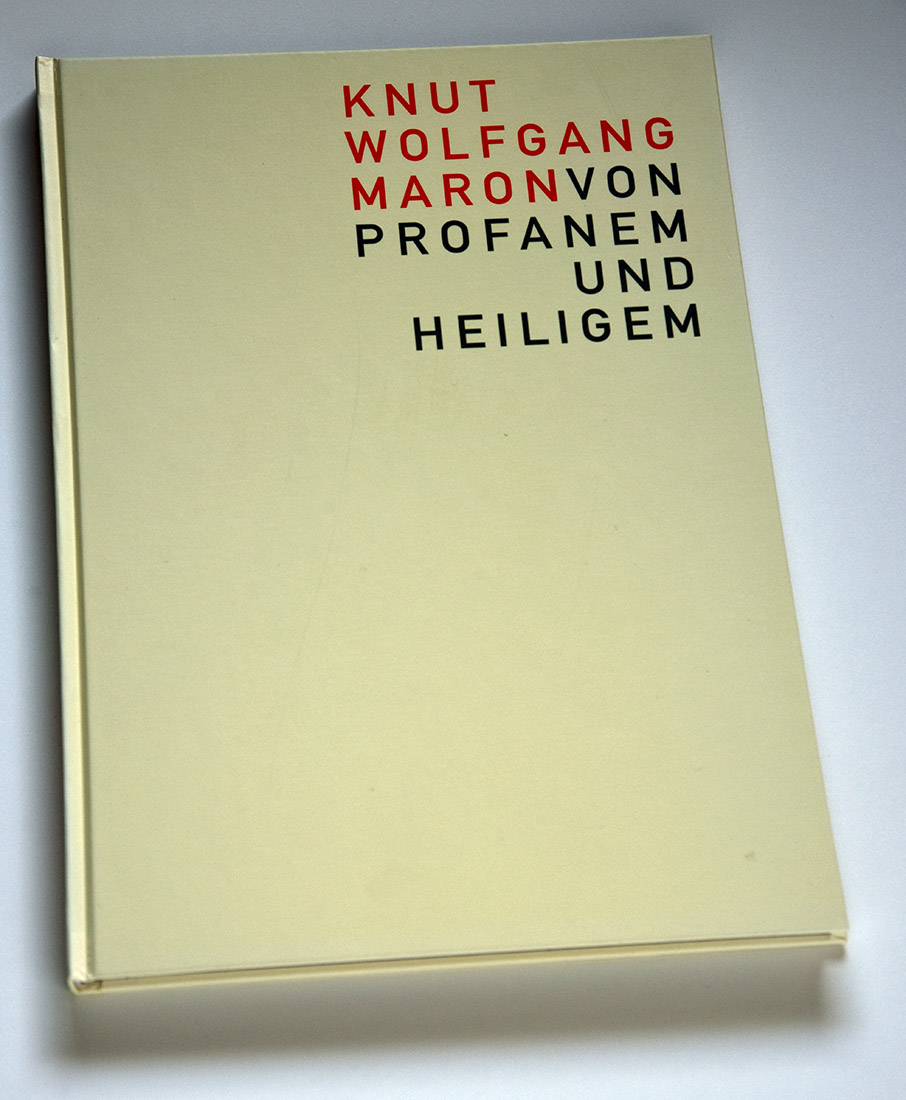 From 1976 to the present day, I have been studying the polyphrenia of the ego in a domestic context by this photo-project. In each affection of another, the person assumes a differentiated perception of the other. You are put into the respective roles: you are the son at your mother's you are the student at the teacher, you are the confessional at the vicar's you are the friend of your friend's you are the music lover in the opera---etc... There is a permanent change, there is no one-to-one stability. The resulting photographic works show me in the housing of my countless roles. An infinite sum could almost make up what the ego might be ... a polyphrenia. The work is conceived as an ongoing project. 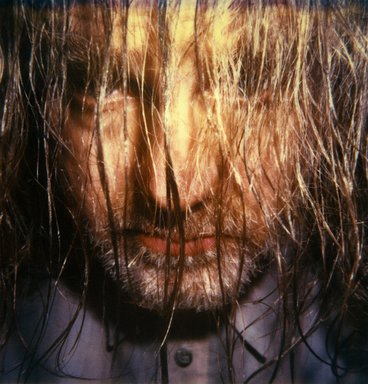 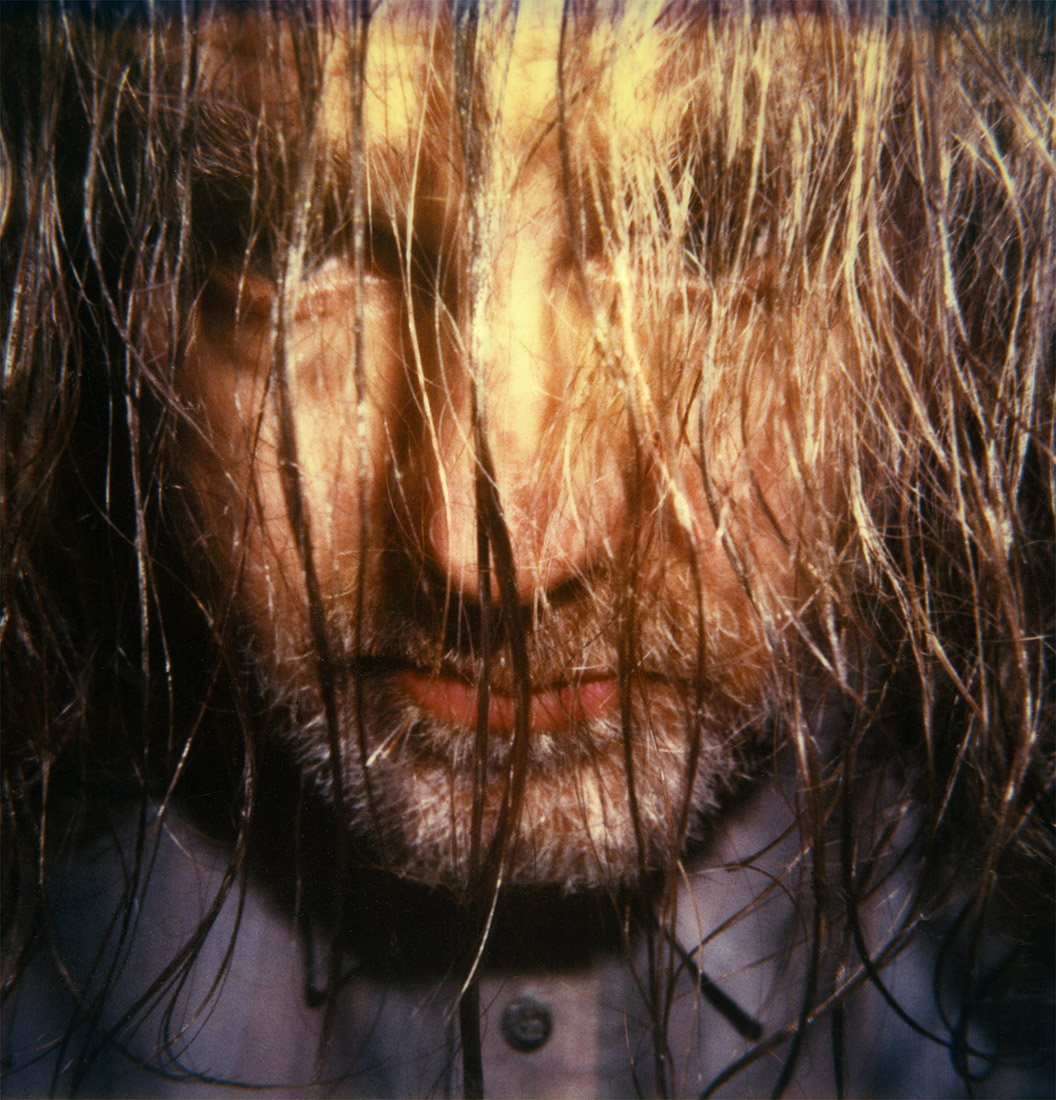