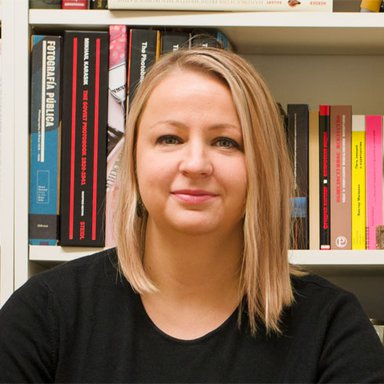 I am an artist, photographer and lecturer for photography at the Rodchenko Art School in Moscow (2012-2017). I grew up in Moscow and studied photography and the theory and history of photography at the University of Duisburg - Essen (now Folkwang University of the Arts) in Germany. I live and work in Berlin and Moscow. My exhibition projects include "Starie Novosti (Old News) at the Venice Biennale (2011), Kunsthaus Baselland (2012) and Maison Européenne de Photographie, Paris (2014); "Russkie" at Museum Moderner Kunst in Moscow (2008) The project "Die Übrigen" was published in 2015 by Hatje Cantz Verlag. I am a holder of an Ellen Auerbach Stipendium at the Akademie der Künste Berlin (2010).

My work focuses on human and its portrait. The projects are based on the documentary-conceptual exploration of the characteristics of human memory (historical and collective memory) and on different communities of people, which occur for me as symbols of contemporary history and its true appearance. Another focus of my work is the processes of contemporary socio-political transformation.

Anastasia Khoroshilova’s installation Starie Novosti (Old News) is currently to be seen in Venice at the historic Zenobiana Library, built in 1777 by Tommaso del Temanza. In stark contrast to the fresco painted in subdued pastel colours on the ceiling of the plush loggia, you find nine photo light boxes (100 x 80 x 15 c m) formally reminiscent of both skyscraper architecture and military or expedition cases. Moreover, the international designations visible on them give the works “obviously” brought and deposited here the transport character of a temporary temporality. Nearly life¬size portraits of women, in richly contrasting colours, show mothers from the town of Beslan in the Caucasus who lost their children during the tragic hostage¬taking at the school in North Ossetia (Russian Federation) in September 2004 (by Dr. Jeanette Zwingenberger) 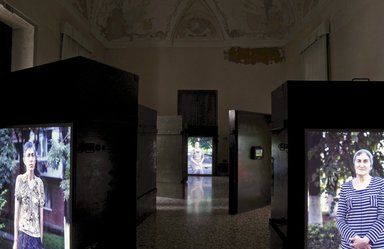 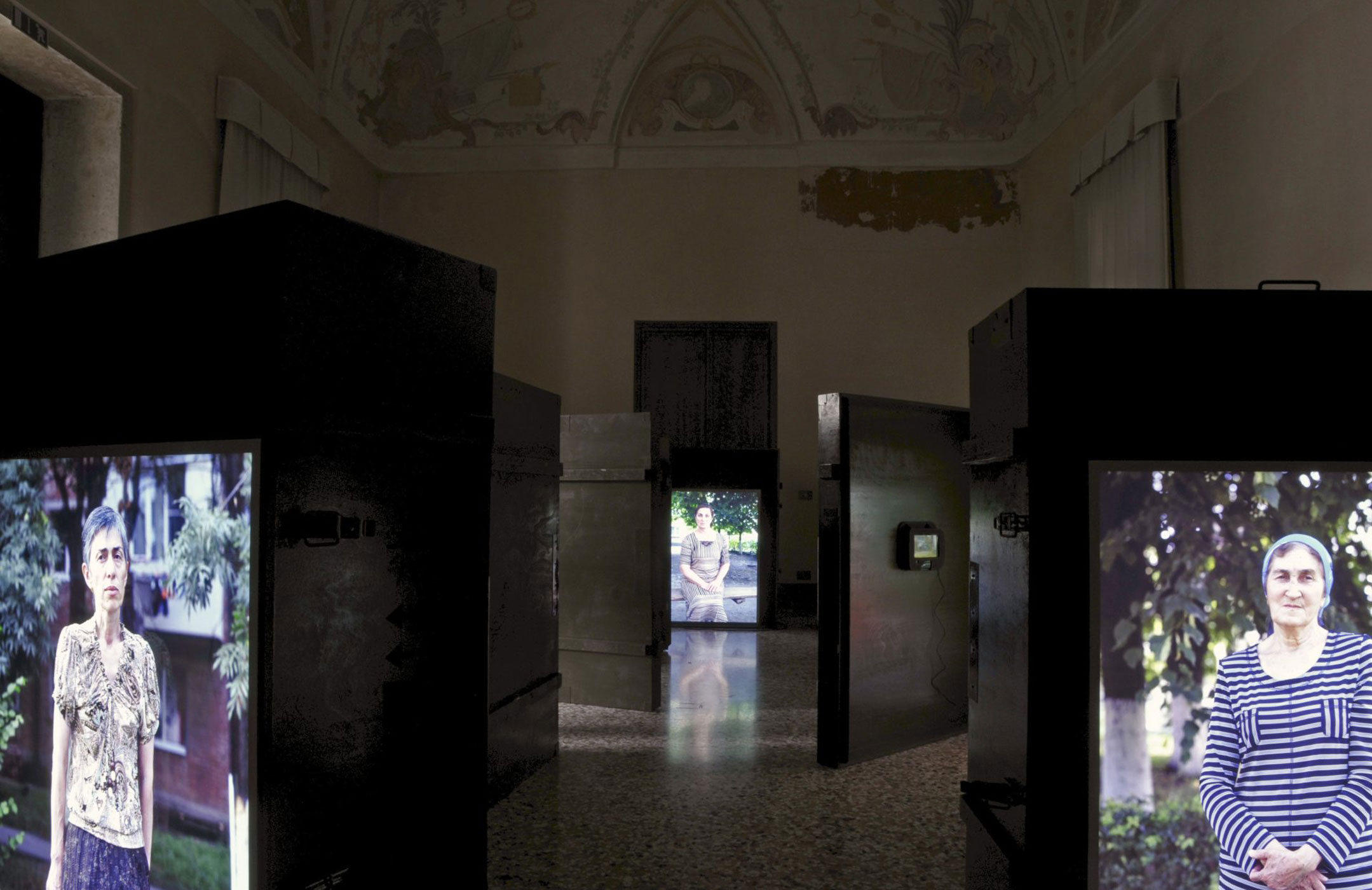 „From the small window in the propeller airplane, we could see ice floats on the Baltic just off the Latvian coast. By now, at the latest, it was clear: Latvia was going to be rough going. But it was too late now to return back. What were we thinking, scheduling our first research trip in February, of all months? On top oft hat, a research trip to a country that Anastasia only vaguely remembered from her childhood, and that for me meant nothing at all. Of course, I knew that the Germans and the Russians fought embittered battles in the Second World War here, where my grandfather lost his life. And I knew that the Soviet Union annexed Latvia right after the start oft he Second World war. But knowing something doesn’t necessarily mean having truly engaged with the subject. I would like to say that I had already thought of great deal about Latvia and its residents before our trip. But that would be a lie. Latvia had played no role at all in my life – until now.“ (Annabel von Gemmingen) 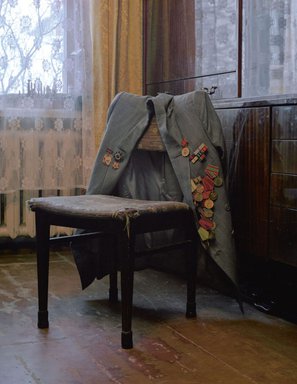 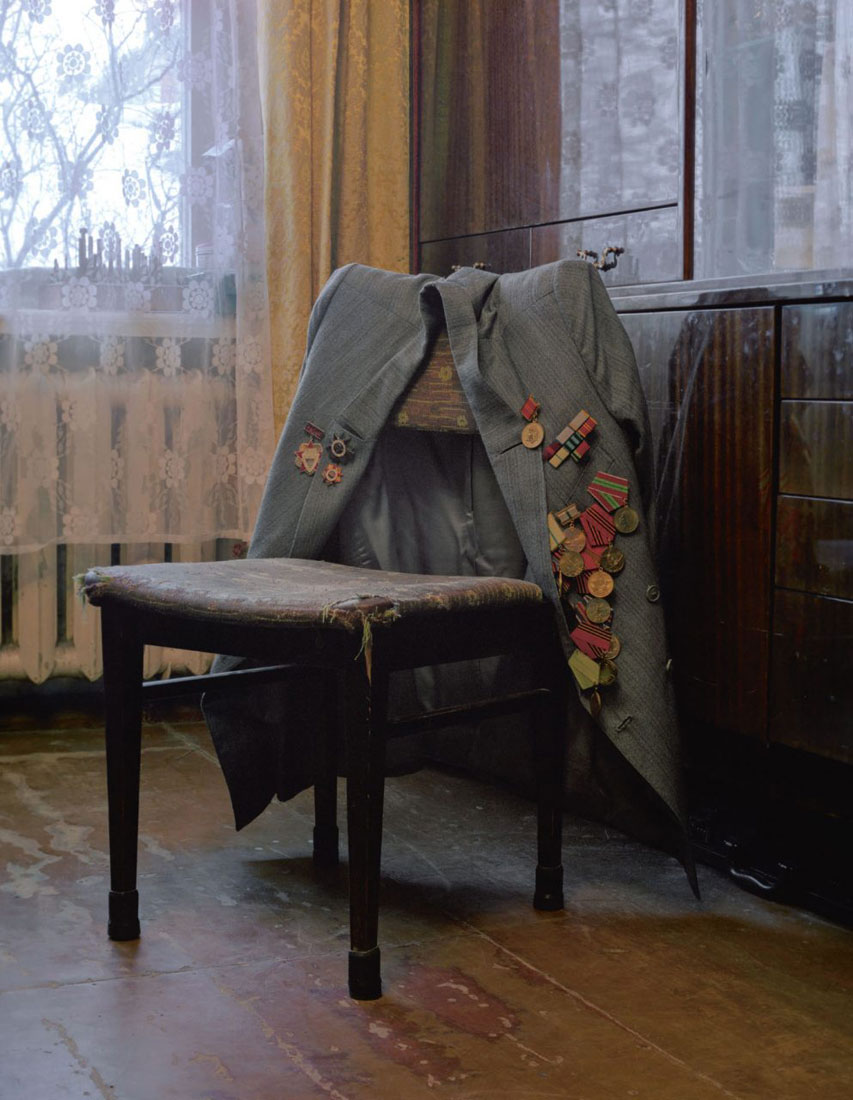 „.... It is a heart of a very different, amazing, but actually existing world at the start oft he third millennium that the photographs of Anastasia Khoroshlova reveal to us, a world beyond all media hype, all quick-paced mass consumption and virtual network hysteria. A world that the developments of modernity largely seem to have passed by, which seems to have preserved its authenticity and soul in this very insularity... Khoroshilova’s photographs are preceded by an intense personal approach. They are never about the mere motif or the exclusivity of a spectacular attraction oft he purely external. Instead, she tired to enter the conversation with the people she found, often through middlemen, to build up dialogs, and to allow these dialogs to have an effect on her and the person opposite her, to gain their confidence. Within the process, what emerges are never „snapshots“ oft he conversation. To that extent, there is naturally a staged portion at work in all the photographs in the visual composition, but it is quite limited. She asks those portrayed to a location in their own element, but exactly where they place themselves, what clothing they wear, what pose they take, or what expression they make: all that was left tot he people photographed… (Dr. Thomas Elsen) 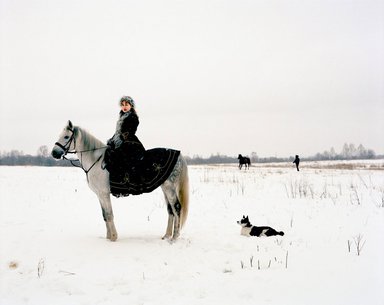 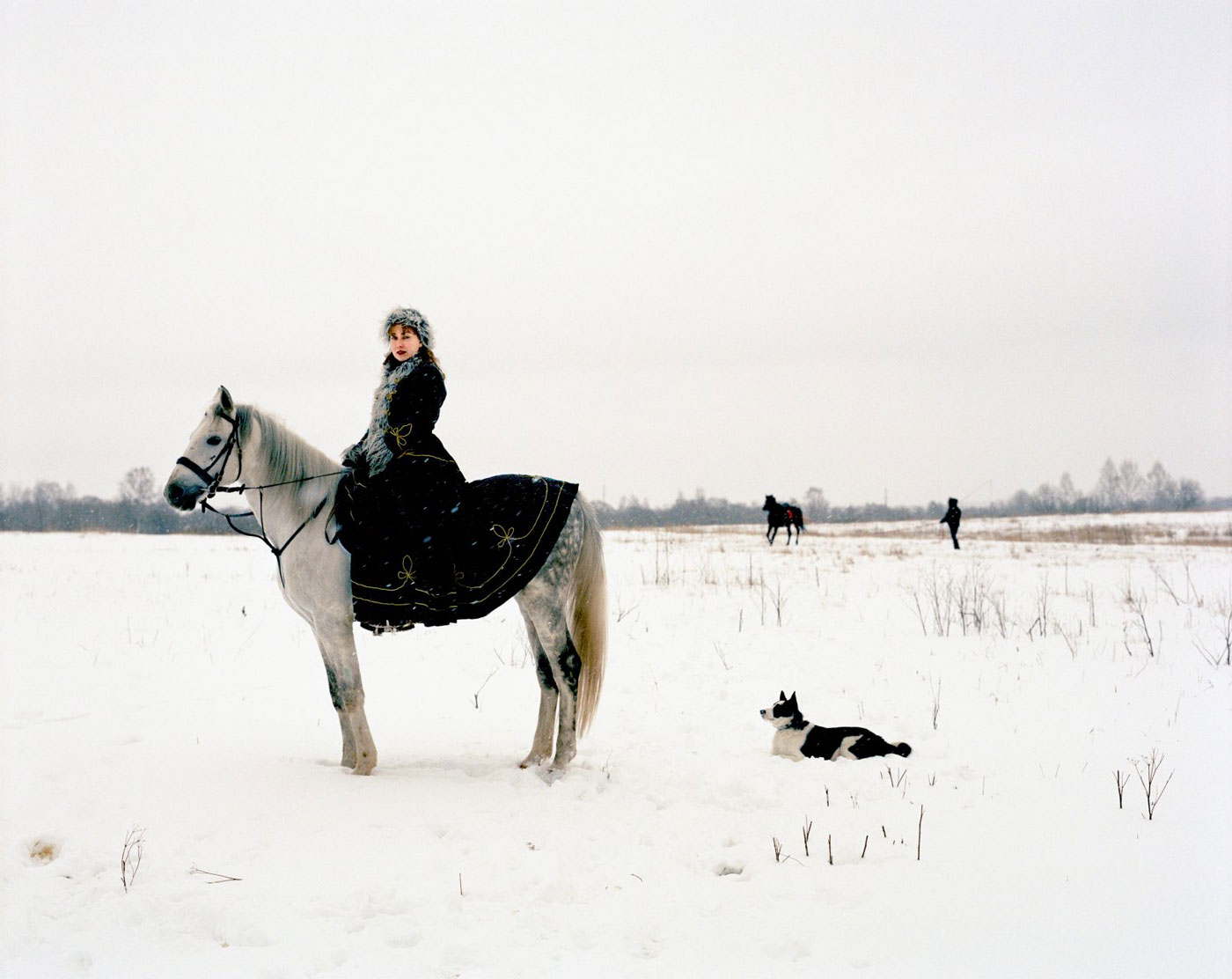 "But first...come with me! We go to Anna. Let's hear her singing songs from my childhood. You know, they are very old songs. Nobody writes them down... She sings very beautifully," says Rocco and walks with me through his birthplace, a small town in the Italian region of Basilicata. For centuries man has struggled here against and together with nature for his living space, for his home. The region with its unique Calanchi landscape is endangered by landslides and earthquakes. It is a place where you can find evacuated ghost towns and thousand-year-old olive trees. This region has little tourist and economic development and is still untouched by globalisation, people mainly live from agriculture. During the Mussolini period, dissidents were sent to Basilicata in exile. The most famous was Carlo Levi, who in his novel "Jesus came only to Eboli" wrote down the memories of this time. "In Basilicata," says Rocco, "Catholicism and magic coexist." And sometimes German is also spoken here. In the 20th century, many people from the region went to Germany as guest workers. Rocco is self-taught and keeps a city archive: "...because one should tell and record the stories about one's home and one's neighbours before they disappear...". Some time ago, probably the largest oil and gas fields in Italy were discovered near the places I visited for his project. 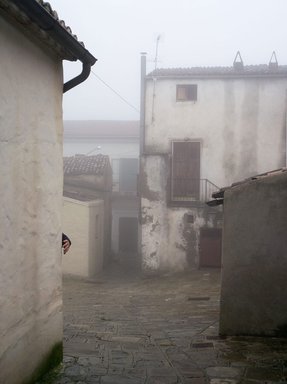 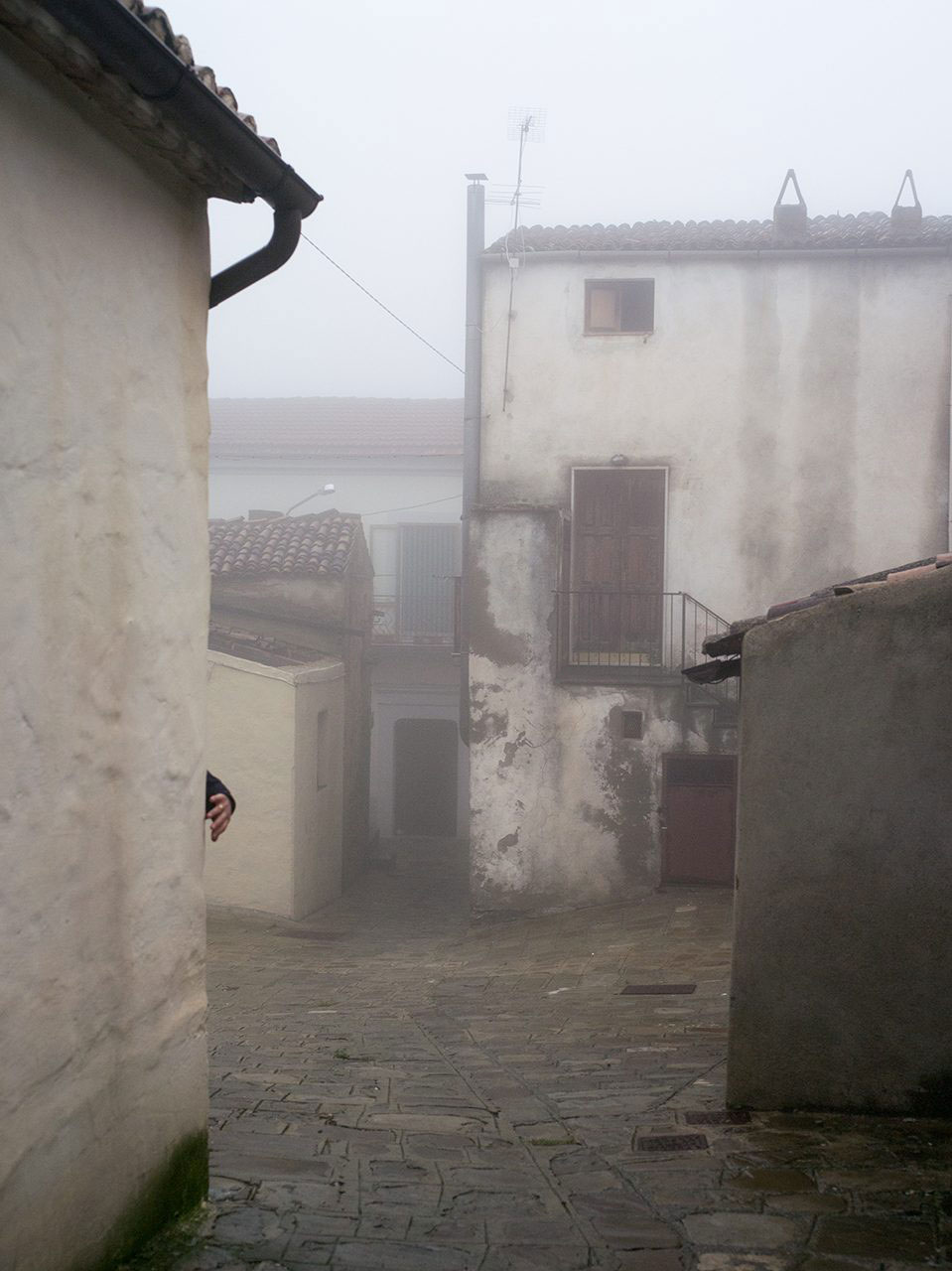