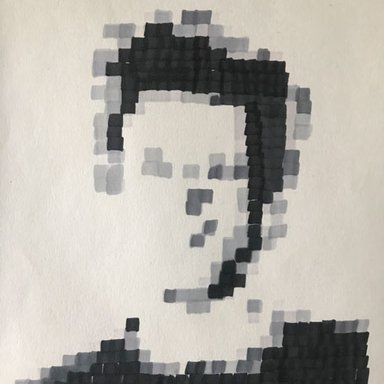 After my studies at the Folkwang University of the Arts in Essen, I completed my postgraduate studies in 1997 in the class of Jürgen Klauke and Valie Export at the KHM Cologne. This was followed by guest professorships at the Kunstakademie Münster, Folkwang University of the Arts Essen, Indiana University, Bloomington, among others. In 2007, I founded REMOTEWORDS with Uta Kopp. From 2013 to WS 2019/2020 I taught photography and new media at the ETH Zurich, where my last position was head of 3D research. In my photo-based works I deal - in the context of a socio-critical discourse - with the function of images that can be understood as a link between social, interdisciplinary and intermedial actions.

In my work, terms such as apparatus, interface and intermediality, the post-photographic and the virtual play a major role. Through media projects and performances, such as " Remotewords " or the series "Seen_through_the_Eyes_of_Google_Earth ", I draw on the new digital media and communication technologies and try to rethink perception and redefine consciousness. ’Digital immateriality and virtual physicality' - these are topics that challenge and fascinate me as an artist. Since my studies at the Folkwang University of the Arts Essen, at the KHM Cologne, or during my research work at the ETH Zurich in the field of 3D modelling/3D printing, I have been influenced by Vilém Flusser, or Isamu Noguchi, among others.

“[...] Bizarre aesthetics and digital abstraction resulting from the recording and translation of the Earth's surface by satellites and drones attracted Achim Mohné in a new series of print sculptures. The first 3D-Google-Earth Model #1 (2018) was exhibited at the Fuhrwerkswaage in Cologne in December 2018. Since then, the German artist has continually worked on the new 3D series in which he is investigating the 3D display methods of virtual globes, which "aesthetically prepare" users for future media such as VR or AR and mixed realities.“ Prof. Dr. Pamela C. Scorzin, “Orbital Art in the Age of Internet and Space Flight: From Terrestrial to Orbital Perspectives - with a particular focus on German artist Achim Mohné“, in: Art Style | Art & Culture International Magazine, vol 5, issue 5, March 2020, pp. 25 - 49. 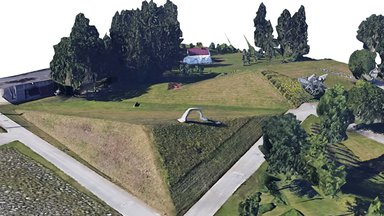 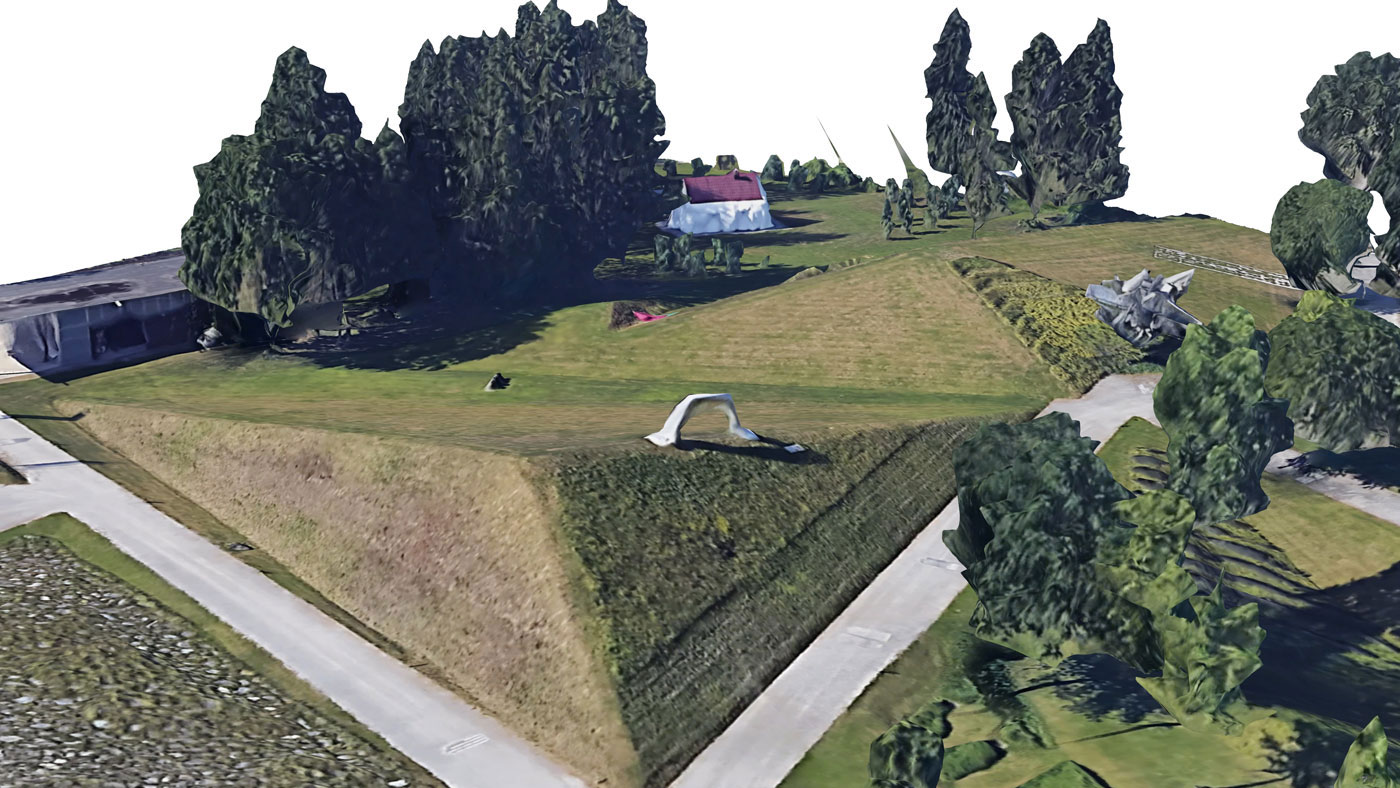 "For me, experiments with the medium of photography arise in syntactical experiments at the intersections of device, interface, software, action, and intermedia, not in picture series hung in museums. Questioning and juxtaposing different analogue and digital media is just as important as investigating the instruments and the processes of distribution. I conducted this sort of “media performance” with scanners for the first time in the year 2000. The issue then was overfishing, which people were gradually becoming more aware of and that is today a major problem. I wanted to show the beauty of fish, crabs and crustaceans. (...) Here, too, cooking and eating together in the form of a ceremony was at the fore. The purpose is not primarily to produce pictures. Instead, it is about pictures functioning as links between social, interdisciplinary, intermedia actions. The attempt to counter ecological offenses is not meant as a moral pointing finger, but rather to show that there are alternatives—in this case even very tasty ones." Achim Mohné, “THE_VEGAN_SCANNING_PRINTING_COOKING_PROJECT“, in: Essentials#12, Galerie Judith Andreae, Bonn 2018. 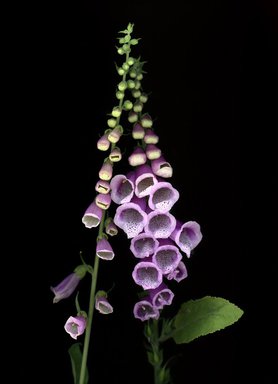 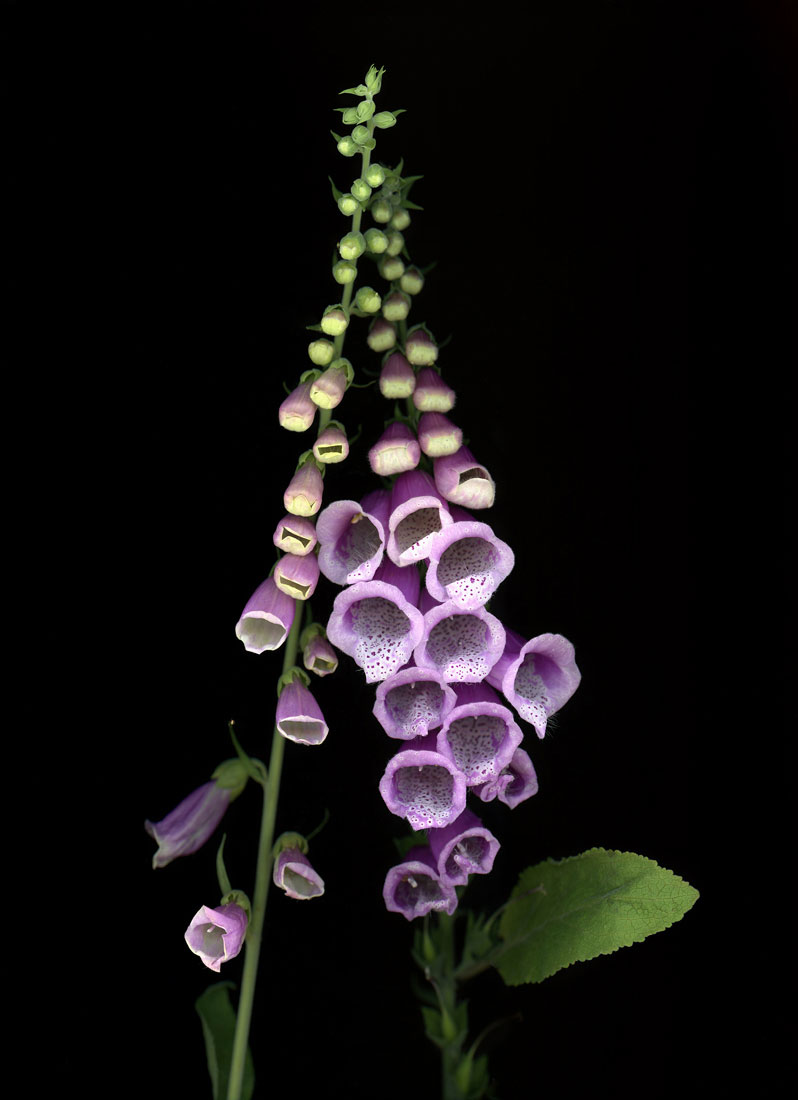 The "fast" medium of letterpress printing in his time made the Reformation possible for Luther; Edward Snowden's worldwide revelations beat the digital technology, which was leading in his "present", with its own weapons. Both "whistleblowers" had the goal of exposing systemic injustices. Lucas Cranach's portrait of Luther is an icon of the Reformation; Snowden's globally circulating portrait stands for the personified resistance against digital surveillance methods. Paradoxically, the portrait of Edward Snowden, which consists of 672 paving stones and measures 12 x 14 meters, is not recognizable on the ground, but only becomes visible through a form of surveillance medium: As soon as the image is captured by satellites, it appears on Google Earth, Apple Maps and other navigation systems. 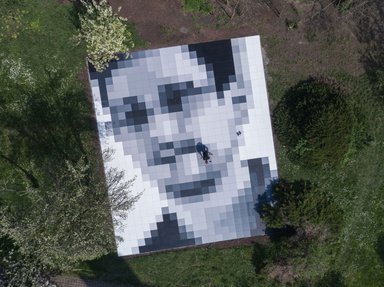 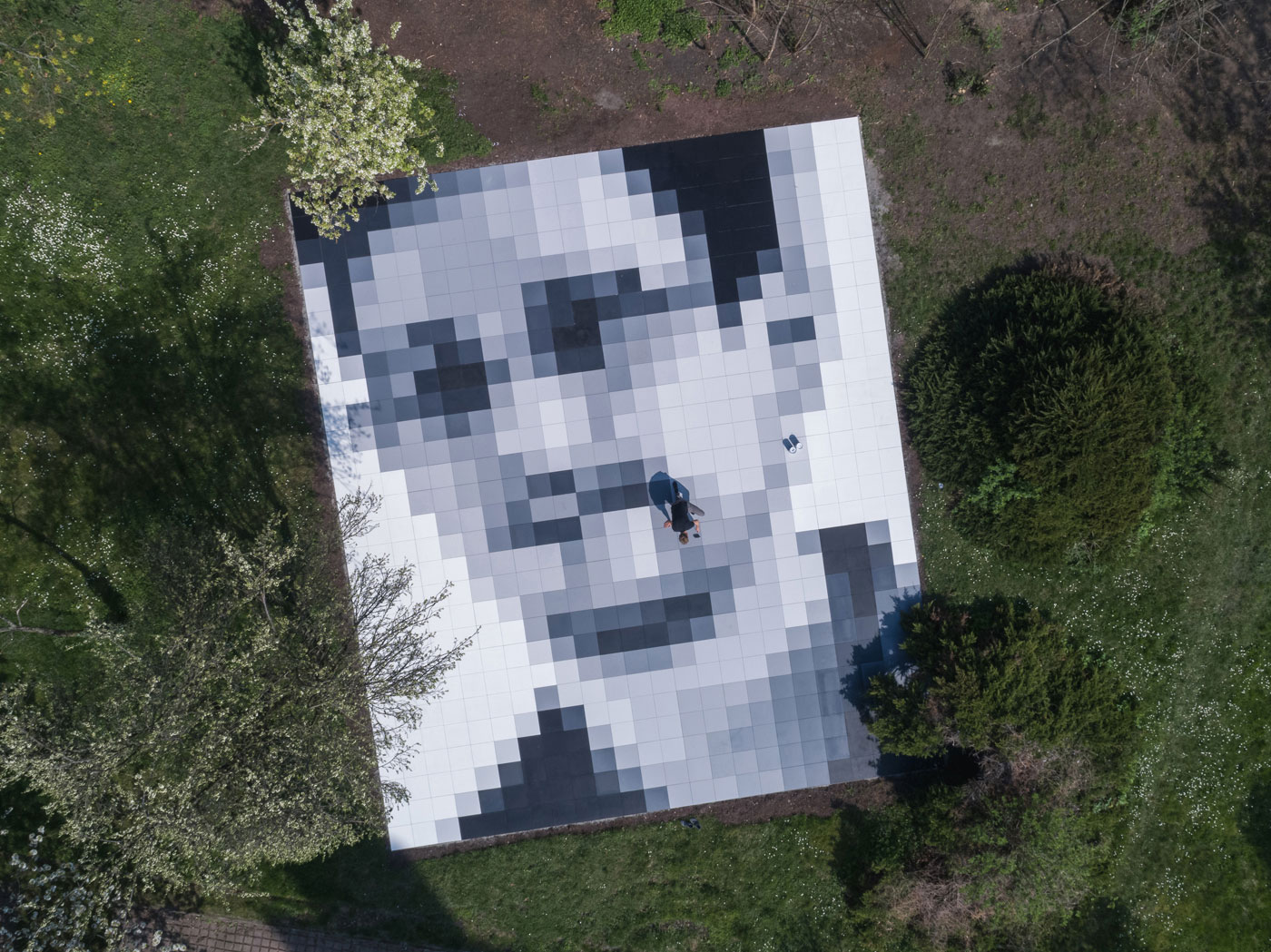 “For New North Zurich, Achim Mohné has thematised climate problems. On the roof of the main Swiss Radio and Television (SRF) building, where weather forecast announcers present the weather at close quarters on a daily basis, he causes a piece of the Aletsch Glacier, the biggest glacier in the Alps and a warning symbol of melting ice, to appear in the form of a 1:1 scale aerial photograph (taken during a balloon flight). Printed on PVC film, it converts this gravel-covered, bitumen-sealed flat roof in North Zurich into a white-coloured statement against climate change. A white roof absorbs about 80 % less light than a dark roof and functions as an effective weapon against the ongoing global warming.” „Achim Mohné ALETSCH_DRAG&DROP. Google Earth: Das Schweizer Radio und Fernsehen, SRF“ in: Neuer Norden Zürich, 2018 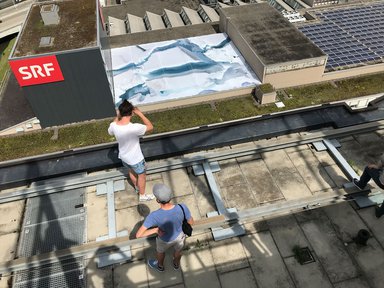 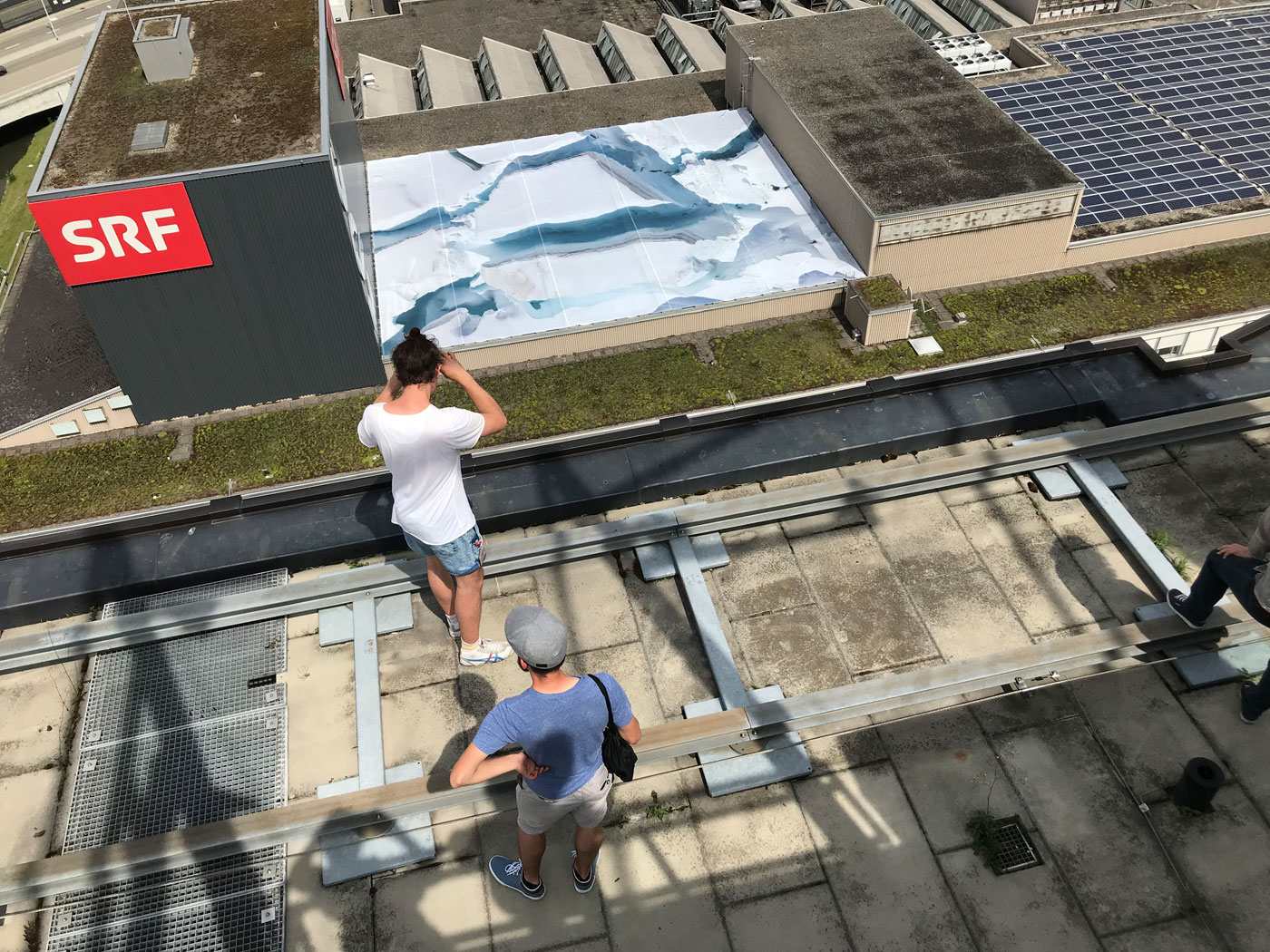