Portfolio reviews are usually a one-on-one affair that takes place exclusively between the reviewer and the photographer.

Until now - in our new Zoom online format, 3 experts review one and the same portfolio, one after the other, without knowing what the others have said before. And a pre-registered audience watches and discusses the differences in the evaluation with us.

Thanks to Thiemo Kloss for presenting his work and to the reviewers for their willingness to experiment and their professional feedback. It was fascinating to watch how Herman and Thiemo talked for a long time about Thiemo's photographic influences before a picture was even shown, how exactly and precisely Nadine asked and revealed Thiemo's influences that he hadn't mentioned before and how Gunther Thiemo first told them before he asked.
Oh, and there was also a zoom hack, to which Thiemo and Nadine reacted very calmly. Anyone who can now list which pieces of advice from our reel "DOs & DON'Ts in portfolio reviews" were used is follower of the month!

Thiemo Kloss is an artist working with photography and moving images. Born in Bonn in 1984, he lives and works in Düsseldorf. He graduated from the Berlin Technical Art Academy in 2011. While focusing on long-term projects, he combines traditional analogue techniques with a digital work environment and develops a new aesthetic for each series. His work revolves around people and the various constraints they are subjected to. Recurring themes are society, the man-made environment and the media.
His work has been exhibited throughout Europe, the Middle East and the United States. In 2018 he had his second solo exhibition at Nachtspeicher23, Hamburg. Recent group exhibitions include Marianne Brandt Award, Young Cheezze Award and OFF Festival.
Kloss has won and been nominated for various awards and grants including the Marianne Brandt Award, the Felix Schoeller Photo Award and the Canon Profifoto Grant.

Nadine Isabelle Henrich: Nadine is a curator, PhD candidate in the history of art and researcher with focus on photography, media art and synthetic media, based in Berlin. Her curatorial work examines the politics of visibility, focusing on photography and digital art practices that subvert and transform normative and colonial narratives in contemporary art and beyond. She holds a MA in History of Art from Humboldt University (Berlin) and studied Curatorial Studies (Frankfurt). She is interested in expanded curatorial practices including community- and coalition-building, and commoning. 2021-2023 she is a Curatorial Fellow of »Museum Curators of Photography«, a collaborative program a.o. the Museum Folkwang and Fotomuseum Winterthur, funded by Alfried Krupp von Bohlen und Halbach Foundation. 2022/2023 she is a visiting Curatorial Fellow at the Getty Research Insitute (Los Angeles).

Gunther Dietrich: Born 1967 in Geislingen/Steige, West Germany. Studied philosophy and comparative literature at the Technical University of Stuttgart. Studied liberal arts with a focus on photography/video at the Hochschule der Künste in Berlin (HDK) with Katharina Sieverding and Dieter Appelt. Many years of self-employment in the fields of film, content management, publication, media design and the art market. Since 2008 founder and responsible for Photo Edition Berlin.

Herman Seidl: Herman Seidl was born in Neumarkt/Styria in 1960 and lives in Salzburg. He studied journalism, Romance languages and literature and communication sciences at the University of Salzburg. Since 1983 he has been working for the Fotohof Galleryin all areas, especially in communication and didactics, and after studying artistic photography at Salzburg College he has been a freelance photographer since 1987.- In his personal photography he is concerned with portraits of people, the individual documentation and interpretation of social phenomena, and media-reflexive works. 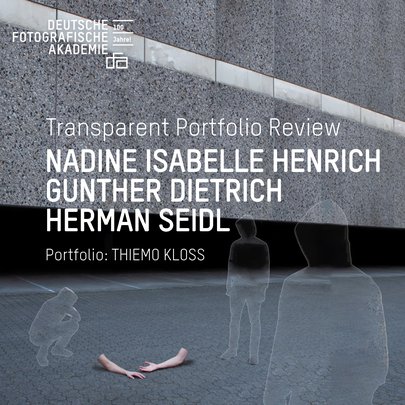