This birthday anniversary is one of superlatives: Hansi Müller-Schorp celebrates her 95th birthday on 18.6. She became a member of the GDL at the age of 23, which simply means that she has been a member of this photographers' association for 72 years.

Hansi's life is closely linked to photography. Her career began in 1945 with an apprenticeship with Willi Moegle. At the beginning of the 1970s, she took over the management of his studio and from then on, at the latest, she was a constant in object photography with strictly composed pictures in which sophisticated lighting took over the direction. She continued to manage the Moegle studio after the death of the old master.

Her commitment to the medium of photography was well established in Baden-Württemberg: At the Stuttgart Gedok she founded the Film and Photo Department, she served on the board of the GDL/DFA for some 25 years (1983-2008) and was a key interface with Leinfelden-Echterdingen, her home location. The DFA awarded her the David Octavius Hill Medal in 2012.

Hansi Müller-Schorp has confidently gone her own way in the male-dominated GDL. Shown here in two scenes from the DFA photo archive: ca. 1957 as a seemingly random picture centrepiece at Otto Steinert's GDL workshop in Saarbrücken (photo: Hans Saebens), and in 1986 surrounded by her fellow board members (from left) Charles Compère, Günter Hildenhagen, Gottfried Jäger and Robert Häusser (photo: Wolfgang Schiche). 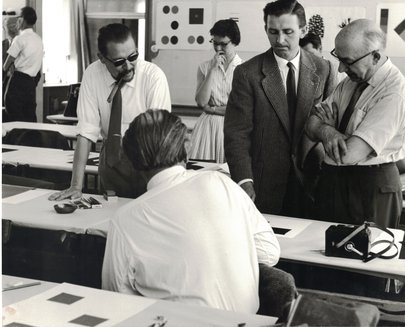 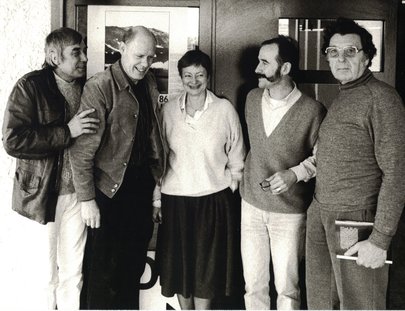